You say you've never been able to get into Frank Zappa... 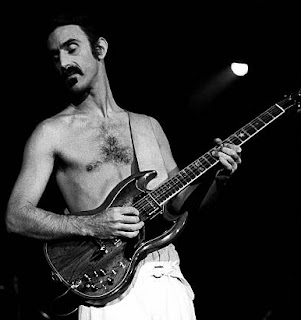 I'm 52 and an admitted music freak. Genre-wise, I am all over the map. I pretty much love it all except for top 40 and current hip hop, and I don't know much about classical or opera but I don't dislike it. I am also highly selective when it comes to twang, but there is a lot that I love.... As for rock, jam band, jazz, blues, prog, and metal music genres, I do have a fair amount of useless data hard-wired to my brain and the propensity to geek out; same thing applies to the music of Frank Zappa, which I consider a genre in itself.

I've been a Frank Zappa fan since my older Brother Scott kicked me down a copy of Apostrophe (') 41 years ago, in 1977, when I was 11 years old. I have studied his massive catalog of music semi-extensively, and I managed to catch 1 live show, Bismarck Theatre in Chicago, November 23rd 1984 <= the setlist, for those keeping score. Sadly, Frank Zappa died from Prostate Cancer in '93, at the age of 52.

At the time of his death, there were 62 legitimate Frank Zappa albums, live or studio, plus 4 compilations. Since his death there have been another 49 posthumous live or studio released albums, plus 11 more compilations, for a grand total of 111 live or studio Frank Zappa albums plus another 15 compilation albums, plus a plethora of unauthorized live bootleg albums. Frank Zappa's music pretty much covered the gamut; doo-wop, rock, fusion, funk, reggae, metal, classical, avant garde/straight up weirdness, even a synclavier era. Also, a lot of the album covers have awesome artwork, and in some cases the cover artwork is even better than the music itself. Were a Zappa Newbie to listen to the "wrong" album first, he/she could be horrified and forever doomed to not be able to get into Frank's music... Which is what prompted me to write this essay. Every so often I will post some Frank Zappa YouTubeage on Facebook, and inevitably a music-head Friend of mine will comment that they don't know much about Zappa and have never been able to get into his music...

My favorite period(s) of Zappa is mostly from around 1973 to '88, a lot of electric guitar based rock and fusion-ish music with incredible bands. I am not as heavily into the earlier stuff, much of it with a higher weirdness factor,  or his synclavier and classical music albums, where he had more of a conductor role. I prefer the more frenetic guitar driven albums.

Below are my top 15 "accessible" Frank Zappa albums, not ranked, but in chronological order instead; with some descriptive comments. Keep in mind this list is 100% subjective, and one man's trash is another man's treasure... But, if you know me personally, you probably have a pretty good idea of what floats my boat, and you may find this list useful.